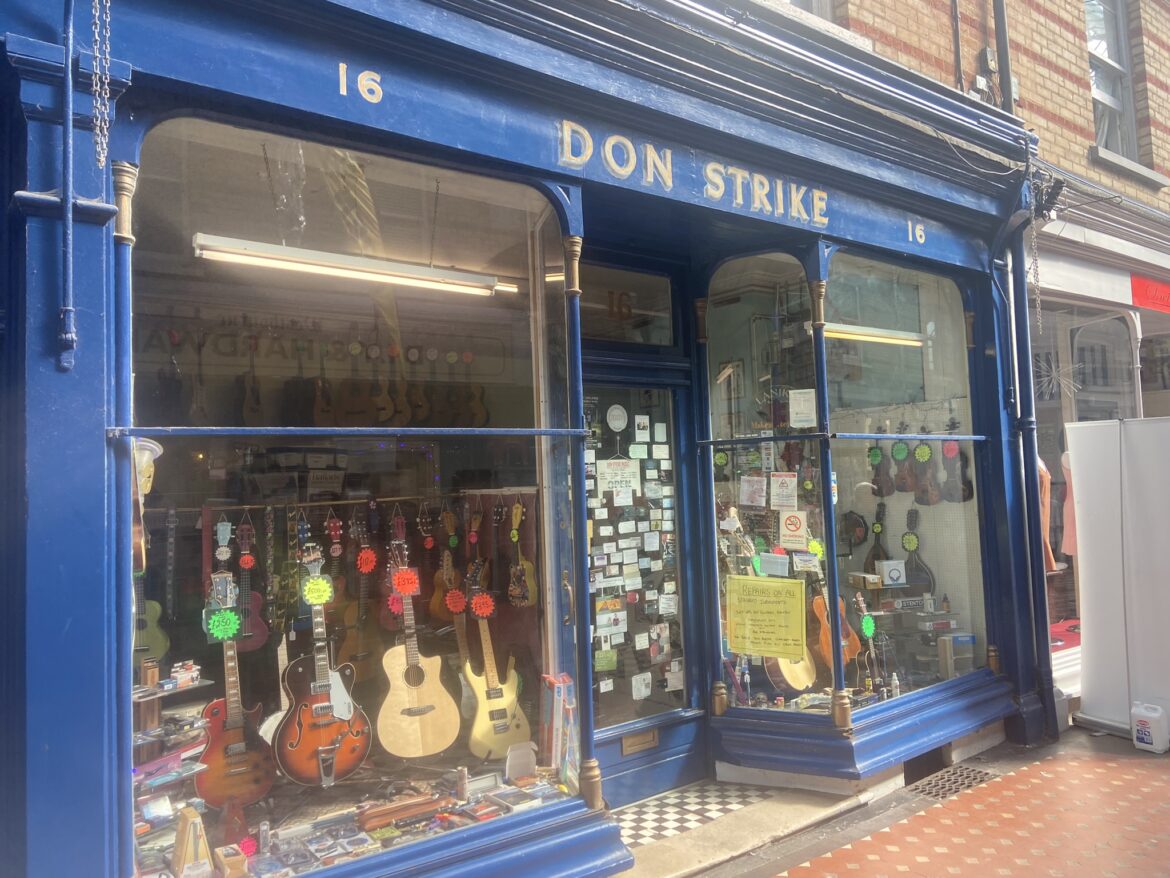 A very pleasant weekend in Bournemouth. On Friday evening I met up with long-time friend Mark Batchelor and a new contact Liz Stacey – violinist in the ELO Experience – at the Hilton Hotel in the centre of the town. A short walk to the Pavilion and we took our seats in the classic seaside venue for a performance by the seven-piece band, who delivered a superb run-through of the Jeff Lynne songbook. Stand out favourites being ‘The Diary of Horace Wimp’ and ‘Wild West Hero.’ Kudos to all the musicians and crew for an excellent show. Mark and I then enjoyed a curry in Old Christchurch Road, before retiring to our respective hotels.

In the morning, Mark and I met up for a walk along the promenade from Bournemouth Pier towards Canford Cliffs. We were blessed with wonderful spring sunshine and a refreshing breeze, which made the stroll by the shoreline all the more invigorating. A coffee at the pleasant cafe sited where Branksome Chine meets the sea made for a relaxing break, before we headed inland through the immaculate greenery.

Arriving at the top of The Avenue, I located the site of County Gates Lodge, where my family lived from 1969 to 1973. The house was pulled down when the existing gyratory system was driven, somewhat controversially, through our back garden. The Lodge marked both the former boundary between Hampshire and Dorset, plus acted as an entrance to the Branksome Towers estate. For more on the history of the estate, please visit the Chineland website. (I see that The Beatles stayed at the local hotel on the cliffs in 1963).

One of the main attractions in Westbourne is the delightful arcade at its heart. Packed with charming independent shops including the historic Don Strike’s music shop. Many a star muso has passed through its door: Greg Lake, Robert Fripp, Al Stewart, Andy Summers and – on frequent occasions – my brothers!

My eldest brother Ken tells this story: “I was a customer of Don’s in the 1950s and I bought my first guitar from him, a round hole Martin Colletti. It took me six weeks on a string of Saturdays to persuade Don to sell. I think it was a rite of passage to prove I really wanted it! I still have the guitar as a momento. Later, in about 1961, I bought a double bass in the shop. Again, it was a first instrument for me to try out – but at least I knew the notes this time. While fumbling around, an accordionist playing in the corner said, ‘Join in, son.’ After a few minutes of playing he said, ‘Right, come back in in six weeks and I will have some work for you.’ An audition passed, before I could really play! The bass had previously belonged to Al Stewart and was the only one – to my knowledge – ever sold by Don. Faces like Andy Summers, Zoot Money and Roy Phillips could sometimes be found jamming in the back of the shop. Great days and special memories. Thanks to all at Strikes.”

Mark and I completed our return walk to the centre of Bournemouth via Robert Louis Stephenson‘s garden and rested prior to hitting the town once more. A drink in the Hilton’s skyline bar kicked off the evening, which featured a delicious Mexican meal in Ojo Rojo, and an entertaining club night at Canvas in the West Cliff with DJ Martyn the Hat.

Sunday morning saw us hook up at the Norwegian Wood Cafe, an outlet boasting many a Beatle related item on its walls. I pointed out to the staff that the photo on the cover of ‘With the Beatles’ had been taken of the group by photographer Robert Freeman in the Palace Court Hotel around the corner in August 1963.

A walk on the beach was calling and we benefited from another gorgeous sunny day, before a final drink in the Royal Bath Hotel garden prior to Mark leaving for town on an earlier train back to London. I then took the opportunity to drop into the neighbouring Russell-Cotes museum and gallery to catch up with the superb range of art, displays of local history and an absorbing new exhibition, ‘Lost Words.’

Walking back down Hinton Road – passing the back walls of the hotels, cinemas and assorted shops and bars in Westover Road – I entered the grounds of St Peter’s Church and was delighted to find that there was only one other person present, namely the resident organist who was filling the breathtaking surroundings with appropriate anthemic chords. We chatted about the church’s architecture and I reminisced about performing solos on the nearby chancel steps in the early 1970s, when I was a regular choirboy during my schooldays. The graveyard outside certainly contains some very interesting occupants, including Mary Shelley, author of Frankenstein, and reputedly the heart of her husband, the poet Percy Bysshe Shelley.

Having taken in the Pleasure Gardens, I collected my bag from the Hilton and took a cab to the main railway station and looked back on a memorable few hours.