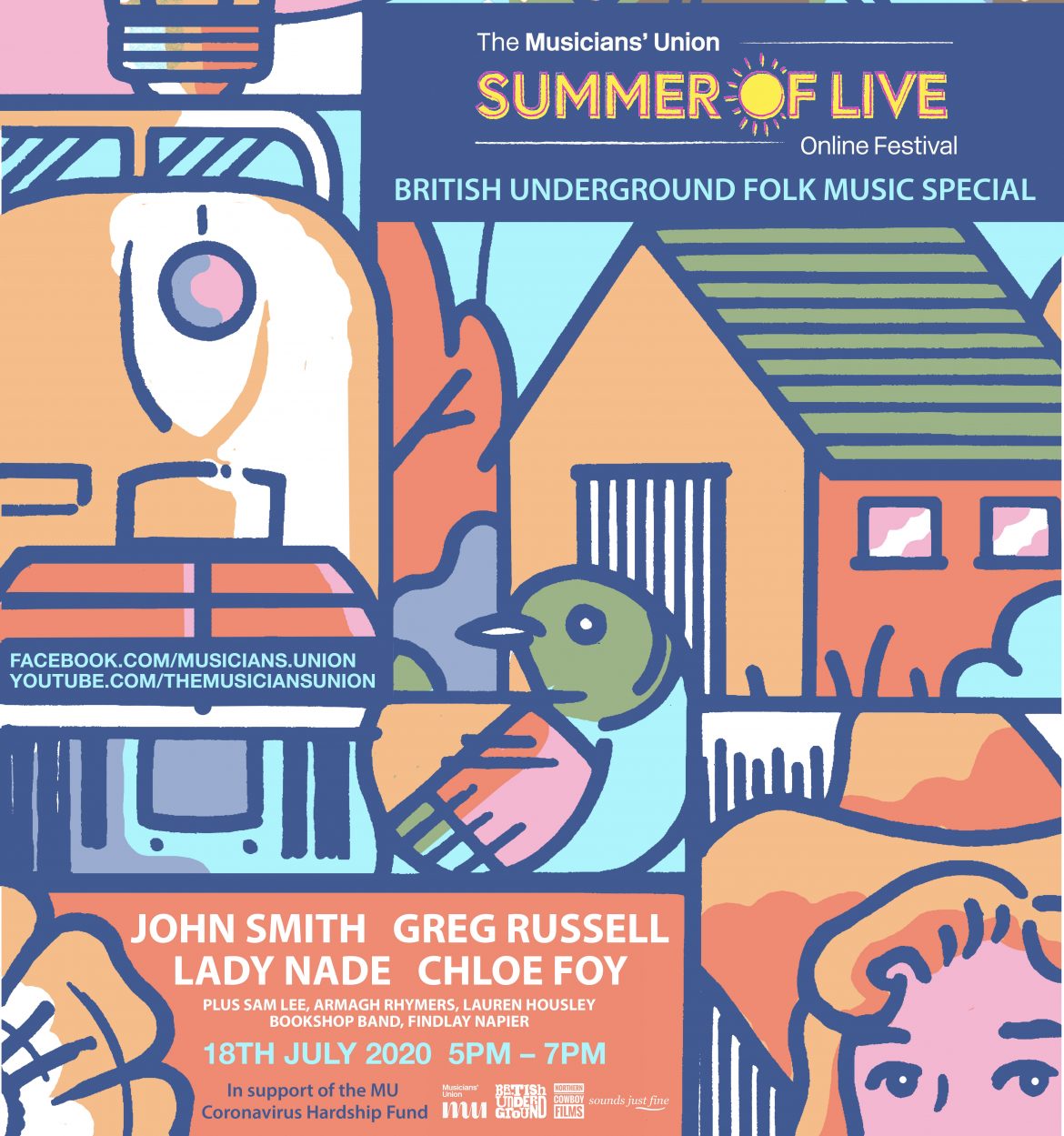 Musicians’ Union and British Underground presented the second Summer of Live Festival broadcast in aid of the MU Hardship Fund for musicians this evening. Hosted by award-winning artist Greg Russell and featuring performances by John Smith, Lady Nade and Chloe Foy, the event took its inspiration from the UK’s vibrant folk music scene.

The MU and British Underground joined forces to the broadcast, which was hosted by the award-winning Greg Russell and featured the talents of John Smith, Lady Nade and Chloe Foy. The magazine format broadcast also included reports from a January 2020 British Underground event in New Orleans featuring Sam Lee, Lauren Housley, The Bookshop Band, Findlay Napier and Armagh Rhymers.

The event was organised to raise money for the MU’s Coronavirus Hardship Fund, which distributes money directly to musicians in immediate financial difficulties.

This is the second in the series of online music events – all being hosted by guest presenters and featuring artists from across the industry – and took place at: facebook.com/musicians.union and youtube.com/themusiciansunion

Greg Russell is a two-time BBC Radio 2 Folk Award Winner. Known for his distinctive, powerful vocals he’s been involved in some of the most successful projects to come out of the UK folk scene in the last three years. Greg is also a presenter for BBC Radio Sheffield.

John Smith has built a reputation as one of the UK’s finest guitarists and songwriters. Raised by the Devon seaside and making his bones in the bars and clubs of Liverpool, John has released five albums with over 33 million Spotify streams. He has played to audiences all over the world in living rooms, festival tents and sold-out concert halls. He is a genuine folksinger, an inquisitive truth-seeker, devoted song interpreter, and enchanting writer. Steeped in the lineage of British folk, taking his cue from Richard Thompson and John Martyn, Smith has evolved a transatlantic blend of fingerstyle and slide guitar techniques.

Lady Nade is a Bristolian singer-songstress with a tender, powerful, velveteen voice, and a knack for creating memorable melodies. Using authentic and powerful narratives. A dedicated food aficionado, she pours creativity into every song, lavishing them with a recipe to match. Having performed in countless locations, from underground bars to festival fields, concert venues to European cities earning plaudits on BBC2, BBC6 and BBC 4 Radio as well as supporting the likes of Grammy nominated Yola.

Chloe Foy has captured the attention of audiences across the globe with her beautiful voice and emotionally direct songwriting. Chloe’s music has accumulated over 15 million plays on Spotify and earnt praise from NPR’s Bob Boilen and airtime on BBC Radio 2 and Radio 6. Highlights include SXSW 2018, Folk Alliance 2020, a headline UK tour, Greenman and Cambridge Folk Festivals, plus a UK/EU/US tour supporting Jesca Hoop.

Sam Lee plays a unique role in the British music scene. He is a highly inventive and original singer, folk song interpreter, passionate conservationist, committed song collector and a successful creator of live events. Alongside his organisation The Nest Collective and a host of fellow collaborators, Sam has shaken up the live music scene breaking the boundaries between folk and contemporary music and the assumed place and way folksong is heard. He has injected a renewed passion into this old material, helping to develop its ecosystem by not only inviting in a new listenership, but also interrogating what messages in these songs hold for us today.

The Bookshop Band is the offspring of an artistic love-affair between a duo of English folk singer-songwriters and an award-winning independent bookshop in the UK, Mr B’s Emporium of Reading Delights. They write and perform songs inspired by books, inspired by hundreds of authors from Shakespeare to Philip Pullman.

Findlay Napier is one of the most highly-regarded performers and creative forces on the Scottish music scene – thoroughly active and a truly energised with a heart-warming zing. He made his name touring and recording with multi-award winning traditional Scottish folk band Back of the Moon.

The Armagh Rhymers are one of the most celebrated traditional music and theatre ensembles on the island of Ireland. Through music, storytelling and drama, they provide an experience that is both entertaining and educational. The Rhyming tradition is a celebration of the ‘theatre of the people’ and has inspired many poets such as Seamus Heaney, Brendan Kennelly, John Montague and John Hewitt.

Crispin Parry, CEO of British Underground, says:
“After an unexpected break from showcases and events, the British Underground team is very excited to have this opportunity to safely bring together some amazing musicians from the thriving UK folk scene. Of course, we are all missing the thrill of real live music, but we hope this streaming event goes some way to bringing that feeling back, while raising money for a great cause.”

The Union will be calling for donations to their Hardship Fund throughout the Summer of Live series:

Fundraising, payments and donations will be processed and administered by the National Funding Scheme (Charity No: 1149800), operating as DONATE. Texts will be charged at your standard network rate. For Terms & Conditions, see www.easydonate.org