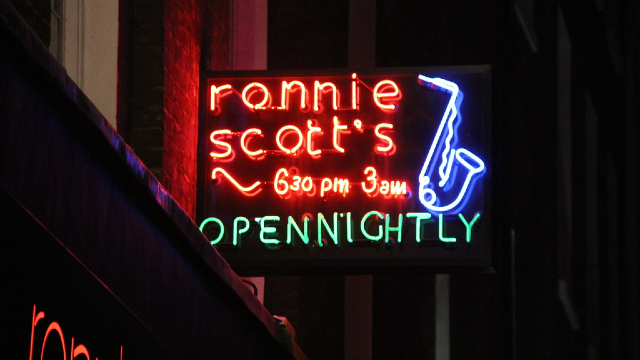 Mark Batchelor and I met up this afternoon at the Nellie Dean pub in Dean Street, Soho, ahead of attending a superb performance at Ronnie Scott’s by the Stacey Brothers’ Big Band Steel Dan Project: aka The Royal Scammers.

Jeremy and the band pay tribute to iconic, multi award-winning American rock band Steely Dan. Co-founded by Walter Becker and Donald Fagen, Steely Dan have sold over 40 million albums and delivered classic songs such as Peg, Haitian divorce, Reelin’ in the years, Do it again, Rikki don’t lose that number and Deacon blues.

The 14 piece band deliver an amazing collective sound and reflect the depth and nuance of their world-renowned inspiration. It was also a pleasure to meet up and have a quick word during the evening with Jeremy, Gary, Dave, Louise, Bryan and Sumudu.

Jeremy is a powerful and highly impressive drummer, who is equally at home playing pop, rock, funk or straight-ahead jazz. He’s played with the likes of Tom Jones, Ryan Adams, Mary Chapin Carpenter, Neil Diamond, The Finn Brothers, Madeleine Peyroux, Gary Barlow, Robbie Williams, Echo and the Bunnymen, Jason Rebello, Tim Garland, and Wayne Krantz. He was the regular drummer with American icon Sheryl Crow for over 7 years. Jeremy also toured the world for 5 years with Noel Gallagher’s band The High Flying Birds and is currently one of the three featured drummers with the iconic band King Crimson.

Mark and I rounded off a memorable evening with a curry at the neighbouring Delhi Brasserie, a coffee at Bar Italia and – after a walk down to Charing Cross – an Oban whisky at The Clermont.