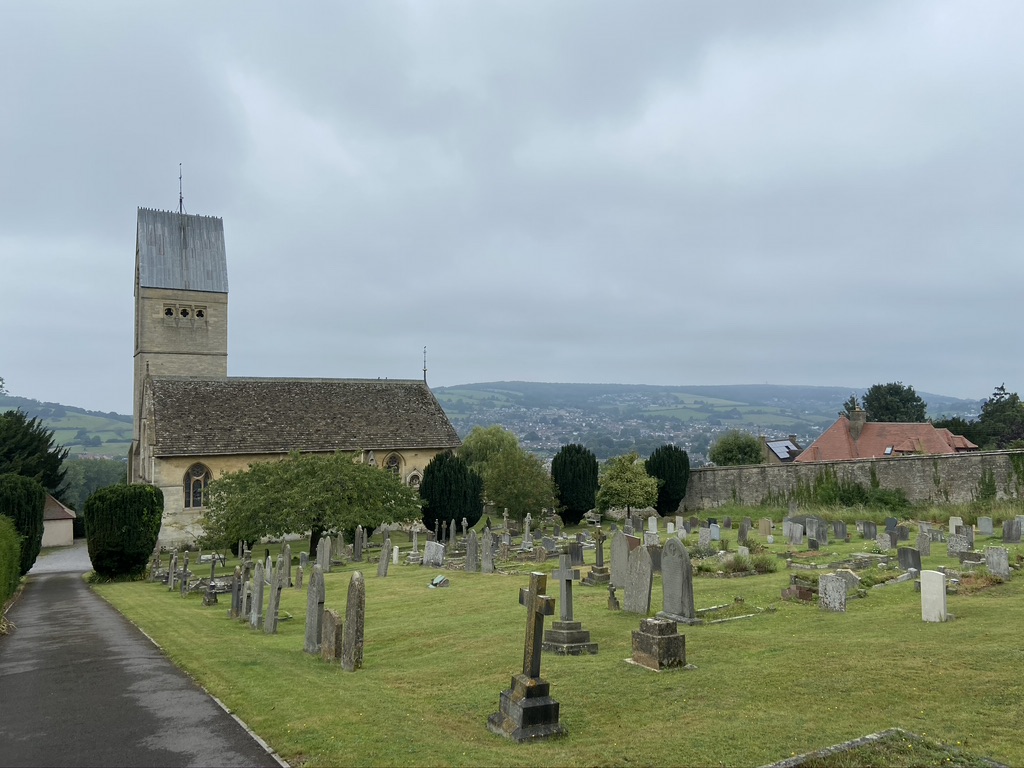 On the way home from Wales, we stopped for two nights at the Clothiers Arms in Stroud, with the aim of visiting our ancestors’ haunts in the nearby village of Selsley. My great grandparents, Sidney and Charlotte Hague (nee Gwinnett), had lived for many years in the Post Office in Pools Lane. Sidney was born locally in 1849 and Charlotte in 1846. We soon found their graves at the superb setting of All Saints’ Church, where he had been a chorister for seventy years. Also close by was the grave of Charlotte’s parents, my great-great grandparents, William and Mary Ann Gwinnett (nee Halliday). William was born in 1820 and Mary Ann in 1817.

Clutching a copy of the photograph featuring my grandparents Thomas Ames and Florence Hague, taken on the day their wedding in July 1902 in front of the ‘ Old Post Office’, we approached the house and was welcomed by current occupant Dame Sarah Connolly, the world-famous opera singer. Sarah was kind enough to let us in, where she showed us some of the rooms Sidney and Charlotte would have called home. Thanks Sarah, your hospitality was hugely appreciated.

We then drove down from Selsley through Middleyard to Kingstanley where we visited St George’s Church and visited the grave of Henry Hague, Sidney’s father, who lived from 1815 to 1899.

On Saturday afternoon, we also took in a local football match and enjoyed a drink at the King’s Head, plus took in with amazement the significant hill where Selsley Cricket Club remains to this day. Sidney Hague featured in many a match there. He also notably played in an exhibition match in May 1882 at Farm Hill, Stroud, against a team led by the sport’s first superstar, WG Grace. According to records online at the excellent CricketArchive.com, Sidney took five wickets with his left arm bowling, namely the scalps of WR Gilbert, LM Day, WWF Pullen, Turnbull and EW Hughes.

On Sunday morning we returned to All Saints and met an extremely helpful and knowledgeable church warden, who highlighted the historic elements of this important Arts and Crafts building. The fascinating windows boast designs by Gabriel Rossetti, Ford Maddox Brown and Philip Webb. We noted the name of local historian and author, Howard Beard, and I resolved to collect his works on the village and hopefully obtain copies of photos featuring Sidney, Charlotte and his son Percy.