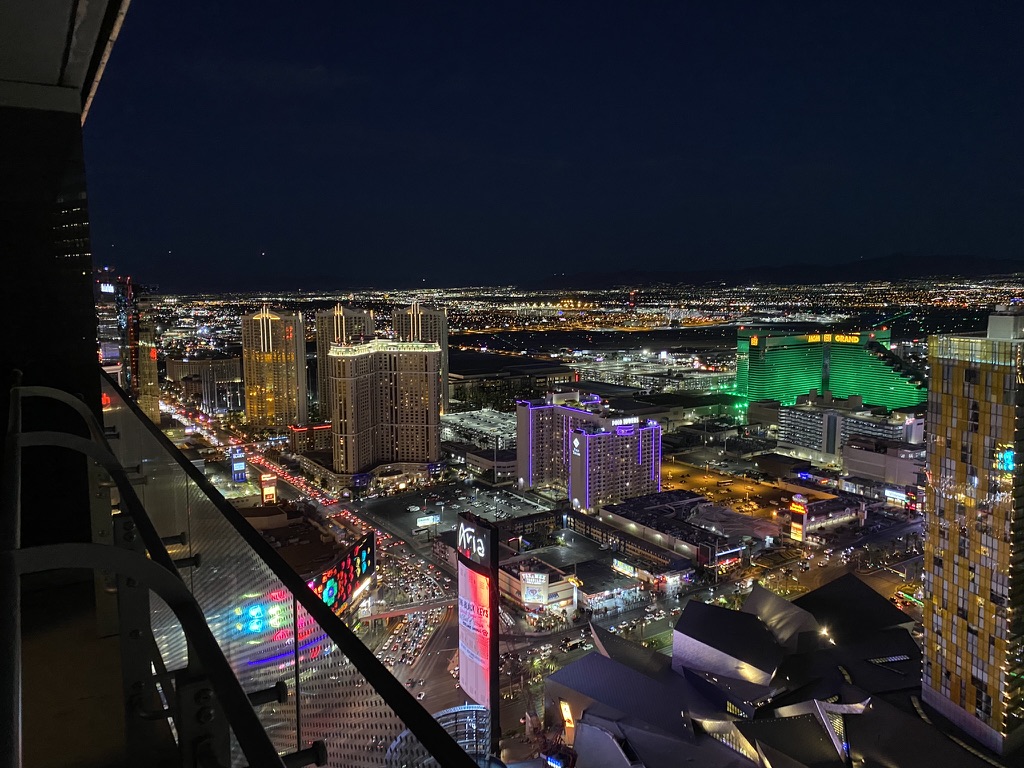 Having experienced the heat and unique vista of Death Valley en route, we arrived in Las Vegas on the 9th (Saturday) and were delighted to find that the Cosmopolitan Hotel – at 3700 Boulevard South – would provide both a superb base for touring the town, plus a world of glitz, glamour and decadence within its own walls.

We were fortunate to have a marvellous room on the 54th floor of the Chelsea Tower, with a balcony overlooking the strip. Walking around we quickly discovered that the Hotel, with its two high rise towers named the Boulevard Tower and the Chelsea, boasts 3,027 rooms, 110,000 sq ft of casino floor, and 300,000 sq ft of retail and restaurant space. Plus a spa, several swimming pools, a fitness facility, theatre, and apparently never-ending spacious meeting rooms.

Stepping outside was certainly a real shock. The change in temperature from the cool indoor halls to the furnace-like blast of the streets was amazing. 46 degrees C seemed to be a daily high.

We initially headed south down the strip and marvelled at the neighbouring Bellagio, famous for its fountains. We were staying in the city for three nights, which gave us the opportunity to enjoy the numerous sights and sounds in the area, including the Flamingo, the Venetian Resort, the Hilton, and a very enjoyable dinner at the Peppermill Lounge.

Julie and Ben had booked a flight to the Grand Canyon on a last afternoon, so I took the opportunity to mix moving around the casino and lazing at the 14th floor pool bar. It may have been expensive, but the pina coladas were refreshing. They helped to make up for my losses at roulette.When Julie and I chanced our collective arm later, we left with the less than princely winnings of 28 cents. Ho hum.

One observation whilst walking the strip, was the encouraging prevalence of British music. Appearing in the city in the coming days were Van Morrison, Rod Stewart, Elton John, Sting and Morrissey! But it was from the shops, retail outlets and bars where the atmosphere was continually set with classics by the Cure, Oasis, Queen, the Stones, Coldplay and more. Our cultural influence still hits home.