One of my long-held ambitions has been to play golf abroad.  Whilst I have played extensively across southern England and on occasion in the Edinburgh area, I have never swung a club overseas.  So it was about time to arrange such a trip and I invited my best man Ian McConnell, photographer Jonathan Stewart and Oliver Morris of UK Music to join me in Lisbon for a few days.

We met up at Gatwick on the afternoon of Tuesday 7 May, to fly to Lisbon airport by EasyJet where we were collected by a Presidencial Car and driven to Cascais, a coastal resort town just west of Lisbon.  Best known for its sandy beaches and busy marina, the old town is home to the medieval Nossa Senhora da Luz Fort and the Citadel Palace, a former royal retreat.

Our base for the next few days was to be the Vila Gale Hotel, where we each had a very comfortable sea view room with a balcony.  We checked-in, then agreed to mark our arrival with drinks in the ground floor bar, where we quickly took over the pool table.  After three extremely long games, we returned to our rooms at around 1.30am.

After breakfast the next morning (Wednesday) our golf transfer arrived, a large multi-passenger vehicle being driven by Carmen who had the classic look of a mature rocker. Turned out he had lived in the Kings Road, Chelsea, for ten years and had enjoyed a few nights out in London!

The short drive to Penha Longa GC soon completed, we were greeted – unfortunately – by heavy rain.  So our teeing off was delayed by an hour.  The course appeared very lush, it was like being in Surrey rather than Portugal!

Once the weather had eased, we started at the second tee (in fact never did play the first hole) and set off in two buggies.  We experienced mixed fortunes score-wise, but had fun nonetheless.  We appreciated the ultra-modern clubhouse at the close of play and enjoyed a few lagers before transferring back to the hotel around half-past five.

Bathed and refreshed we headed into Cascais where we found a cafe style restaurant serving squid and omelettes.  We also discovered an excellent small bar where we befriended the bar staff who recommended the nearby Attic Bar as this stayed open until 4pm.  Several hours later, Ian and I returned to the Hotel around half-past two, however Jonathan and Oliver didn’t make it back until half five!

The following morning (Thursday) we rose, gingerly in some cases, and met in the reception before walking to the station and catching a commuter train into Lisbon.  We spent a leading and enjoyable afternoon walking around the town in the welcome sunshine, having a superb tapas lunch and dropping into a music shop where Ian tried out an unusual Portuguese guitar.

As the Europa League semi-finals involving Chelsea and Arsenal were taking place that evening, we walked into Cascais and found a bar serving pizzas and showing the football.  Johnny and Oliver retired early but Ian and I saw the Arsenal match finish and then walked back to the Hotel bar in time to see Chelsea win on penalties.

Friday morning saw us at the wonderful Oitavos Dunes GC, a world-class track listed as the 55th best course on the planet by Golf World in 2017.  Having collected our buggies from the ‘formula one’ style garage and warmed-up on the challenging practice putting green, we headed over to the first tee bathed in sunshine. 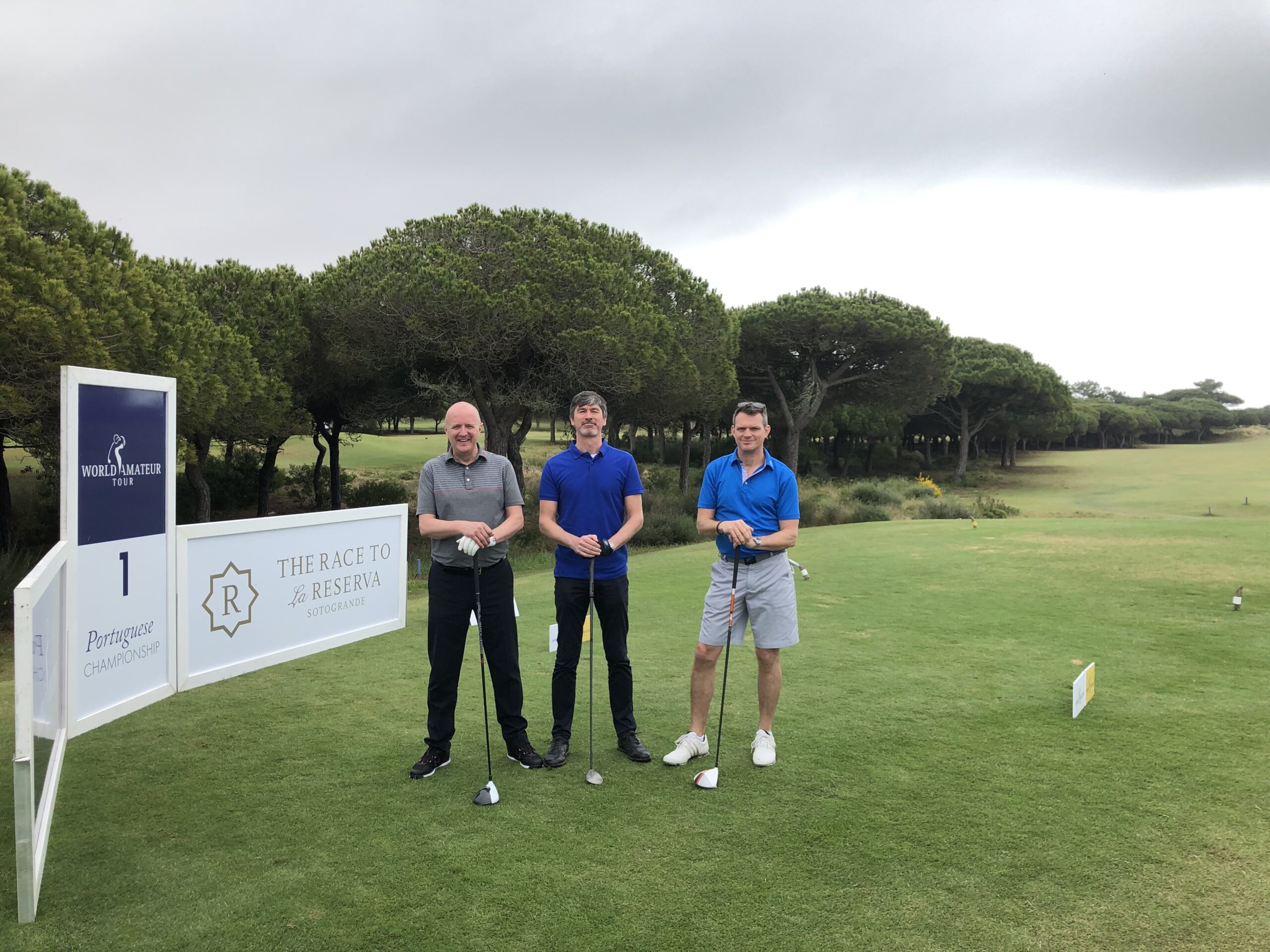 The course is characterised by wide open spaces, rocky outcrops and beautiful views, plus some wonderful houses set around the fringes. I played better this time and hit a few memorable long shots, while Ian and Johnny were more into their stride following our Penha Longa round.

The greens were a little up and down in quality, but nothing was going to detract from our day and the 18th proved a marvellous finish.  All three players (Oliver was sitting this one out) struck fine final tee shots and when we walked down the fairway we found all three balls in a group ideally positioned for approaching the green!

Our last action was my mid-length par putt, which I happily holed, and we walked up to the refined terrace at the bar where we appreciated the fantastic sea view.

Ian was flying back on the Friday evening as his band Crash’n’Burn were playing a gig on Saturday, so we bid him goodbye at the hotel and the three of us remaining strolled once more into Cascais and found an excellent restaurant where we had a particularly fine meal.  A visit to our regular small bar and the Attic meant we ended our nights out in Cascais in familiar fashion.

Saturday was always planned to be a day of rest and after breakfast, having seen Jonathan laid out by the pool, I walked into the town and purchased gifts for home and had a soft drink at an outdoor cafe overlooking the harbour.  I bumped into Oliver on the way back, who was also on his way to the shops.  We could not return empty-handed!

Lunch on the hotel terrace was followed by more lounging by the pool.  Our transfer to the airport was scheduled for half-past five and although our flight was delayed, it wasn’t too long before we touched down at Gatwick.  Jonathan booked a taxi home to Richmond and Oliver and I took a second taxi to Beckenham and Sydenham where he was staying overnight.  (It was Jonathan’s birthday on the Sunday, hence our returning in time for his family celebrations).

My thanks to the guys for a great holiday.